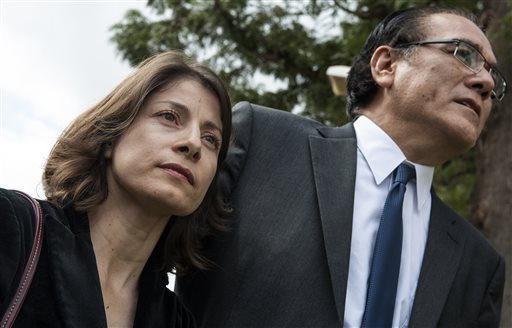 SANTA ANA, CALIF. — A psychology professor was handcuffed and taken to jail Thursday after rejecting a plea deal from prosecutors who claim she had a role in killing a man she says raped her as a college student in 1995.

Norma Esparza proclaimed her innocence in an unusual news conference before she was taken into custody and as advocates chastised the Orange County district attorney’s office for sending what they called a chilling message to sexual assault victims.

Her lawyer said Esparza’s reluctance to report the alleged crime nearly two decades ago has her facing a murder charge for the stabbing death of the man she says raped her.

“If you ever get raped or touched, make sure you report it to police,” defense attorney Bob Corrado told reporters. “If she had done that she wouldn’t be here today.”

Esparza, who is now a 39-year-old psychology professor living in France, was jailed after rejecting a manslaughter plea deal offered by prosecutors. They allege she encouraged the 1995 murder of Gonzalo Ramirez after pointing him out to her ex-boyfriend at a Santa Ana bar.

The Mexican-born, California-raised Esparza claims she was raped by Ramirez after meeting him in 1995. After telling ex-boyfriend Gianni Van about the alleged assault, Van “took matters into his own hands” with a group of friends, her husband Jorge Mancillas said.

Esparza was taken to a transmission shop and shown a bloodied Ramirez and threatened while a man waved a gun, Mancillas said. Van told her they later released Ramirez but Esparza learned when she was interviewed by police weeks later that he had been killed, he said.

She was then pressured to marry Van so she could not be bound to testify against him, Mancillas said.

Over the next 17 years, Esparza made a life for herself. She graduated from college, obtained a doctorate, consulted for the World Health Organization and began teaching in Europe. She eventually got a divorce from Van and married and started a family.