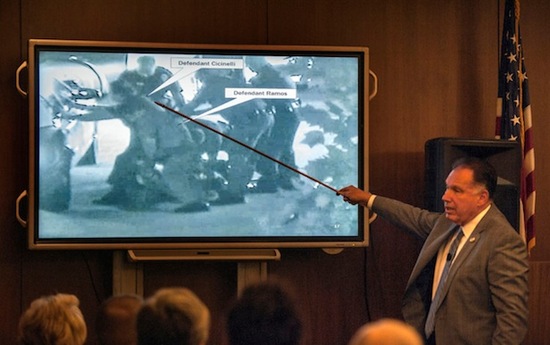 Tony Rackauckas’ Orange County District Attorney’s office didn’t just battle two feisty defense lawyers yesterday during opening statements in a case against two former Fullerton cops accused of wrongly beating a homeless man to death in 2011.
Behind the scenes, Rackauckas’ office clashed with The Radio & Television News Association of Southern California (RTNA) over prosecutors wanting copies of the courtroom recordings a KCBS/KCAL cameraman made of opening statements for members of the media pool covering what is being called the Kelly Thomas murder trial.

During the lunch break, KFI-AM 640 news reporter Steve Gregory, an RTNA board member, saw someone he didn’t recognize downloading media pool copies of opening statements by Rackauckas as well as John Barnett, who represents one of the accused ex-Fullerton cops.

Chris Kim identified himself as an assistant in the DA’s media office.

Gregory, who said he was acting in his RTNA role and not as a KFI employee, ordered Kim to stop.

“The DA isn’t permitted to plug into our media feed,” Gregory said. “That starts to blur the lines between media organizations and a government law enforcement agency. The feed is proprietary to us, the media. It’s a big no-no for them to try taking the media feed.”

Gregory’s stance prompted the ire of unamused DA Chief of Staff Susan Kang Schroeder, who stated she had hoped to put opening statements by Rackauckas as well as the two defense lawyers online for the public to see.

Froeberg, who’d previously granted media pool requests to film opening statements, closing statements, verdict and sentencing, then ordered both the TV pool cameraman and the print pool cameraman from The Orange County Register out of the courtroom before Michael Schwartz, who represents accused ex-cop Manuel Ramos, gave his opening.

The dispute resulted in near universal frustration and Schroeder is ready to blame.

“It’s Steve Gregory’s fault,” she said. “Steve Gregory screwed everyone with this stunt. It’s bizarre. The broadcast news feed should be public. It’s a recording of what happens in a public courtroom.”

“The judge has no right to argue that the media has to cooperate with a DA or defense lawyers by giving them copies [of the pool feed],” he said.

“It’s pretty ridiculous that they want to block the public from seeing everything that happened inside the courtroom,” she said, noting that the DA’s office now will likely only post Rackauckas’ opening statement on its website as early as today.

Terrell says his organization is considering writing a protest letter to the DA and working with court officials to prevent future confrontations.