02 Dec Is Another Gang Injunction in the Works for Santa Ana? 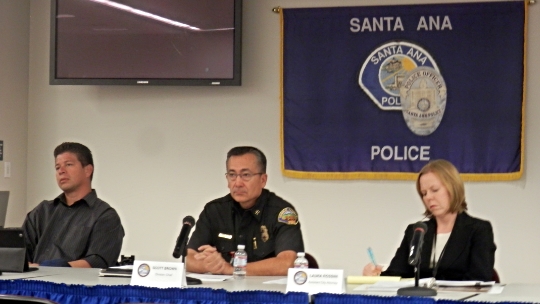 Last night, Santa Ana Police Department (SAPD) Commander Tammy Franks and Assistant District Attorney Tracy Rinauro talked to a community gathering about the city’s sole gang injunction: the one affecting Santa Nita street gang, enacted in 2006. But residents and community groups didn’t gather to debate the merits of that injunction. Instead, they spoke out against rumors that a new one is being planned against the Townsend Street gang.
Back in late August, they claim, SAPD gang unit members said as much during a police presentation at the KidWorks center in the neighborhood.

Vanessa Cerda, a neighborhood resident, took to public comments to caution against any such plans. “No one has notified me or my community if we wanted a gang injunction,” she said. “I created a petition and I gathered signatures against [fusion_builder_container hundred_percent=”yes” overflow=”visible”][fusion_builder_row][fusion_builder_column type=”1_1″ background_position=”left top” background_color=”” border_size=”” border_color=”” border_style=”solid” spacing=”yes” background_image=”” background_repeat=”no-repeat” padding=”” margin_top=”0px” margin_bottom=”0px” class=”” id=”” animation_type=”” animation_speed=”0.3″ animation_direction=”left” hide_on_mobile=”no” center_content=”no” min_height=”none”][it].” Cerda tells the Weekly that her partner is a former gang member that has left the life behind but still faces harassment by law enforcement. “It will only make it worse,” she says if an injunction is implemented.

Her viewpoints were echoed by grassroots organizations like Chican@s Unidos and Boys and Men of Color that stressed civil liberty concerns citing the recent ruling by the Ninth Circuit against the OVC gang injunction in Orange and promoted preventative programs for youth as a viable alternative. If police are building a case, residents and groups are building community, holding their first outdoor family movie night Friday on Townsend Street from 5 p.m.-7 p.m. with free parking at nearby Jerome Park.

Deep into the public safety meeting, city councilman Roman Reyna raised a key question regarding a possible injunction. “Have we started to collect data in [the] Townsend area to move in this particular direction?” Santa Ana Interim Police Chief Carlos Rojas offered a response. “It’s better not to speak on any specific issue,” he said citing concerns of breaching confidentiality, “but we are constantly looking at data related to all our hot spot areas.”

Later on, the KidWorks presentation was brought up once more from the audience. “I have not authorized anybody from my staff to talk about any gang injunction,” Rojas said. He then turned it over to Commander Franks who heads the gang unit.

“I actually reviewed the presentations,” she said of her officers that participated. “The [residents] were advised that [injunctions are] just one tool that can be used, not that we are intending to,” Franks said, though noting that she wasn’t present at the center.

“If there are gang injunctions to be done here in the city,” Rojas added, “I will be at that community meeting.” He apologized for any misinformation that may have been communicated and said that his phone line is open.

“The council members seemed very willing to learn and it showed that this meeting was useful,” Carolyn Torres of Chican@s Unidos said after it wrapped up. Having called Chief Rojas for clarification prior to last night, she remains unconvinced that there are no active plans for a gang injunction on Townsend.