31 Oct Is Tustin, California a Nice Place to Live?

Tustin is a city located in Orange County, California, in the Los Angeles metropolitan area. As of the census of 2010, Tustin had a population of 75,540. The city is located next to the county seat, Santa Ana, and does not include the Tustin Foothills.

Because of a top 10% ranking in per capital and one of the shortest commutes in Southern California, the city was chosen in 2009 by Forbes as one of the top 25 towns to live well in America.[fusion_builder_container hundred_percent=”yes” overflow=”visible”][fusion_builder_row][fusion_builder_column type=”1_1″ background_position=”left top” background_color=”” border_size=”” border_color=”” border_style=”solid” spacing=”yes” background_image=”” background_repeat=”no-repeat” padding=”” margin_top=”0px” margin_bottom=”0px” class=”” id=”” animation_type=”” animation_speed=”0.3″ animation_direction=”left” hide_on_mobile=”no” center_content=”no” min_height=”none”][3]

In education, Tustin faired pretty well, in my view. The city had 87.9% of students attending public schools and 12.1% attending private schools. Irvine had 96.3%/3.7% and Top 100 average was 91.5%/8.5%. There were similar numbers of colleges and universities in the Tustin-irvine area and we beat the average by 1 school.

How about quality of life? How does that get measured? At CNN, they used several factors that made for some interesting outcomes. These, to me, are the most important numbers. So, here they are side by side (apologies if the numbers don’t line up):

In leisure and culture, CNN looked at what is around us in regard to movie theaters, restaurants & bars, libraries and museums. It is safe to say Irvine and Tustin both share similar numbers in all categories and exceeded the Top 100 average in every category except muesums, where the average is 10.

CNN also had a “Meet the Neighbors” category which shows some pretty enlightening numbers. For example, Tustin and Irvine both share the average of just over 35 for median age. And, although Irvine has more folks who have completed some college, we can boast our Divorce rate is a full 2 percentage points higher. Oh…. well, I guess that’s not much to crow about. Seriously, marriage is lower and divorce is higher in both towns than the Top 100 cities. We are in California, after all. 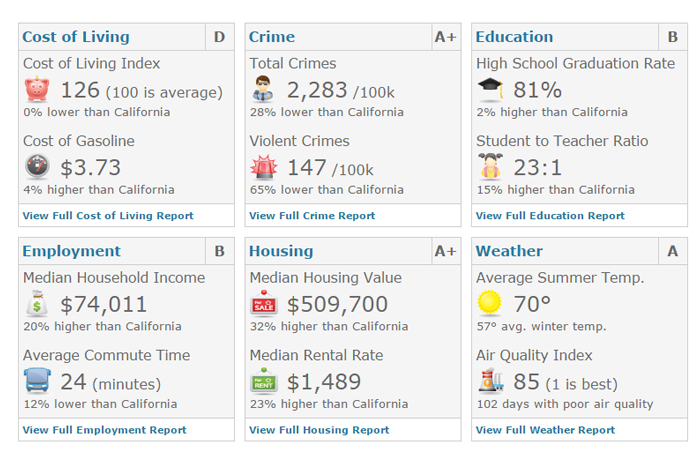 Overall, in the grand scheme of things, I think Tustin fares pretty well. If there was a category for hometown feel, I think we would have taken honors, at least here in California. Where else can you get concerts in the park, movie nights, free fireworks (both on and off the dais) and a city whose streets are filled with trees? Our Old Town is being revitalized with new businesses (if you haven’t been there in awhile, check it out) and we have residents across the city who take an avid interest in how our city is run. I’ll stack that up against Irvine any day.