Posted at 21:14h in Bail Bond Articles by spiralmode
0 Likes 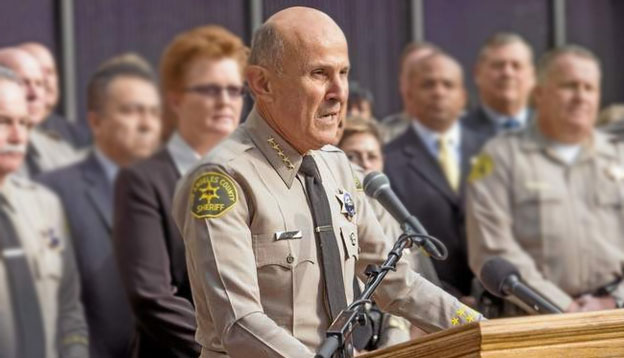 With Sheriff Lee Baca abruptly retiring at the end of January, and a duly elected successor not taking over until December, county leaders have begun moving to fill the void, even as a newly appointed official is setting up his office to oversee the department.

The Commission on Jail Violence had urged the Board of Supervisors to create Inspector General Max Huntsman’s position to strengthen oversight of the Sheriff’s Department. His first day was Jan. 2.

Huntsman is not concerned about arriving at the department just as Baca is retiring. Their tenures would overlap by only a month.

“We are providing oversight of the department, not of the sheriff,” Huntsman said.

With someone other than Baca at the helm, however, Huntsman’s job could become more complicated.

Since the sheriff is an elected official, he is not legally required to answer to an inspector general appointed by the board. Baca agreed to give Huntsman full access to department files. A different sheriff could technically refuse. Huntsman said that loophole will soon be closed through an ordinance to be passed by the board.

“The board has a lawful duty to supervise the Sheriff’s Department,” he said. “I believe that once we get an ordinance in place, we will indeed have a lawful basis for access.”

Huntsman said he hopes, however, that the ordinance would not be needed.

“I’m optimistic that whoever the sheriff is, that person would want to participate in the reform process,” he said.

The blue-ribbon Commission on Jail Violence urged the supervisors to create the Office of Inspector General in September 2012 after a nine-month investigation concluded deputies engaged in “a pattern of unnecessary and excessive use of force” against jail inmates.

Huntsman, a veteran prosecutor, has conducted several major corruption investigations, including those against the cities of Bell and Vernon.

In the meantime, Baca’s spokesman, Steve Whitmore, said the Board of Supervisors’ lawyers — the Office of County Counsel — have started reviewing the credentials of members of the Sheriff’s Department’s command staff to see if they have the necessary certifications and meet the other legal requirements to be appointed interim sheriff.

“The process could take up to 90 days, but we don’t think it’ll last that long,” Whitmore said. “We hope the interim sheriff will be in place before the sheriff leaves.”

Baca’s own choice for interim sheriff is Assistant Sheriff Terri McDonald, who joined the department only last March.

Her position did not exist before then. Its creation was among the reforms recommended by the Commission on Jail Violence, which said the department needed a manager who would focus on the jail system, the largest of its kind in the world.

Supervisor Mark Ridley-Thomas also expressed support for McDonald, whose last job was undersecretary for operations at the California Department of Corrections and Rehabilitation.

“The freshest face of reform in the Sheriff’s Department is Terri McDonald, and I believe, quite frankly, that reform is the order of the day,” he said.

“She was hired to help move reform forward — everyone else was already here.”

Ridley-Thomas acknowledged, however, that other names have been thrown into the hat.

“All of the other assistant sheriffs have been mentioned, every one of them,” he said.

Supervisor Don Knabe is wary about appointing an interim sheriff who would seek election, and two of the three remaining assistant sheriffs — Todd Rogers and James Hellmold — are potential candidates.

“From my perspective, I’d like an interim sheriff who’s not going to run, so they can spend the time doing their job,” Knabe said.

“We want to be on solid ground so that when we make the appointment, we’ll do it right the first time,” he said. “Right now, we’re just waiting to hear from county counsel if the candidates are qualified.”